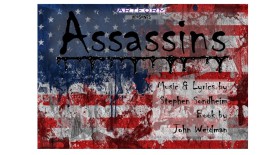 This darkly humorous, revue-style musical portrays a group of historical figures who attempted (successfully or not) to assassinate the President of The United States. With music and lyrics by Stephen Sondheim and book by John Weidman, it explores what the presence of these would-be assassins in American history says about the ideals of their country. The music is written to reflect both the style of music from the various eras, as well as the broader tradition of ‘patriotic’ American music.

"I had my spirits lifted by Doctor Theatre this afternoon - an absolutely incredible production of Assassins by the always phenomenal Artform!"

"Wow, huge congratulations to all involved. What a truly accomplished production. For my money, streets ahead of the over-stylised Menier production. A simpler, more direct handling of the material made for a more literate and, at times, moving performance. And I loved the set!"

"Awesome production, so glad we were there to witness it. Sheila Arden does it again with a very talented cast. Very well done to all associated with Artform."

"Congratulations to Sheila Arden and the entire company of Assassins. I really enjoyed tonight's performance. Such a talented bunch of performers, musicians and creators. As for Mr Sondheim - you did it again - so clever!"

"Has been blown away this evening by an amazing cast and production team. Artform's Assassins was incredible. Massive well done to all, thoroughly enjoyed it. Such a professional production."

"I just got home from watching Artforms Assassins. One word Stunning. Sheila Arden's Direction is, as always brilliant and totally captivating. She interprets Sondheim's difficult and challenging stories so well. Set, lighting and band were terrific.The whole cast were absolutely outstanding, with all their characters totally believable, but Matthew Westrip's performance was simply mesmerising, and he had such a commanding presence. Don't know if there are any tickets left, but if so grab one!"

"Congratulations to all involved in Artform's Assassins at the Broadway Studio Theatre, Lewisham (on until Saturday night). Great individual performances, crisp choreography, lovely direction, VERY tidy band and tight harmonies. Really, really good. And that was just the first night!"